As protests erupted across the country following the death of George Floyd, every major entertainment company in Hollywood issued statements of support for the black community.

But as unanimous as that show of solidarity was, it was also clear that this wasn’t a fight Hollywood could watch from the sidelines. As the uproar over “Gone With the Wind” showed, the movie industry has a past — and present — to reckon with. At a recent protest in Los Angeles organized by major talent agencies, actor Michael B. Jordan turned his focus to the studio headquarters around him.

“Where is the challenge to commit to black hiring? Black content led by black executives, black consultants,” said Jordan. “Are you policing our storytelling as well?”

Hollywood’s record in diversity and inclusion has improved in recent years, but it still lags behind the population — particularly in its executive ranks. (It’s easier, Spike Lee has joked, to get a black president than a black studio head.) Statements and donations are well and good, many say, but Hollywood studios and production companies can speak far louder by green-lighting diverse movies — and reexamining those who do the green-lighting.

“Are you policing our storytelling as well?” Michael B. Jordan (@michaelb4jordan) calls for diverse hiring in Hollywood. 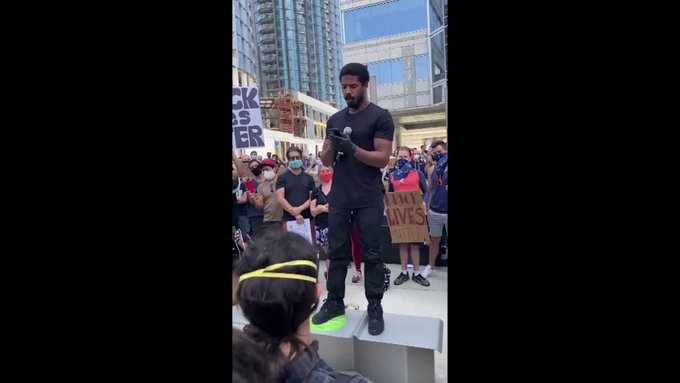 “This is a golden opportunity for Hollywood to look at itself in the mirror and decide what side of history it wants to be on,” says Darnell Hunt, dean of social sciences at UCLA.

UCLA’s annual Hollywood diversity report has found a notable increase in lead acting roles in the most popular films in recent years. Researchers argue diversity is good business. People of color, data shows, often buy more than half of tickets to the most successful films.

But Hunt has also found a lack of systemic change. Some 93% of senior executive positions at major and mid-major studios are held by white people and 80% by men. He has outlined a five-point strategy for more meaningful progress, from the bottom up.

“Every institution in our society to the extent that it’s not helping to eradicate the problem is complicit to a some degree. I would argue that Hollywood stands right at the center of that,” says Hunt. “When you have an industry that’s structured around white men in control, it echoes the white supremacy that’s at the core of the critique of policing right now.”

Five years ago, after the Academy Awards fielded all-white acting nominees, the hashtag #OscarsSoWhite became a rallying cry. The industry and the film academy have changed since then but it hasn’t happened overnight. At this year’s Oscars, the South Korean film “Parasite” made history for non-English language films but the awards still featured only one acting nominee of color.

Now, at a defining moment for race in America, some in the industry leaders believe stronger steps are necessary. The Academy of Motion Picture Arts and Sciences last week said it will make new inclusion standards for Oscar eligibility. Hunt, who has consulted on that initiative, said it could apply to either the diversity of individual films or a distributor’s overall record of inclusion.

The Writers Guild of America West, in an open letter from its Committee of Black Writers to industry leaders, demanded action, not words.

“Either you commit to a new, institutionalized system of accountability with and to black writers, or you prove that you’re putting on just another strategic, virtue-signaling performance deemed necessary to survive the times,” read the letter.

The debate recently stirred by “Gone With the Wind,” only highlighted what’s at stake.

After pressure from filmmakers including “12 Years a Slave” producer John Ridley, HBO Max temporarily removed the 1939 film. The highest grossing movie of all time despite its glamorized portrait of slavery in the Antebellum South, “Gone With the Wind” is part of an ignoble Hollywood legacy stretching back to “The Birth of a Nation.” When the film returns to the streaming service, Turner Classic Movie host Jacqueline Stewart will contextualize it.

“We can see with ‘Gone With the Wind’ how profoundly people’s understanding of American history has been shaped by these popular entertainments,” says Stewart. “It’s forcing us to confront the roots of racism in our country and to think about the role the media has played in shaping our understanding of race.”

Recent films like Ava DuVernay’s “Selma,” Dee Rees’ “Mudbound” and Spike Lee’s just-released “Da 5 Bloods” have lent a corrective to history as seen in the movies. More are on the way. Since the protests began, several documentary projects have been announced on the Tulsa race massacre, including one produced by LeBron James.

Lee’s frequent co-writer Kevin Willmott recently completed a drama, “The 24th,” about the Houston Riots, in which some 150 black soldiers marched on Houston in 1917 after a police force evolved from plantation patrols and slave catchers brutalized them. Janet Pierson selected the film for SXSW before the festival was canceled, because, she said, it powerfully captured an important but little-known chapter in history. Willmott, who’s currently in talks with a pair of distributors, considers the Houston Riots a precursor to today’s unrest.

“One of my fears is that it’s a pretty strong film. In the climate we have now, I worry that it will scare some people,” says Willmott. “I hope that America has the courage to show this film because this is what America is dealing with right now. I know that dramatic movies about black resistance to injustice and oppression are hard sells in Hollywood.”

It’s a good time to consider what films are getting greenlit, picking up distribution and getting hefty marketing support. When the director George Tillman (“Soul Food,” “Men of Honor”) first came to Hollywood, he found that the kinds of movies he wanted to make were set to modest budget parameters and marketed only to African American communities. Tillman remembers thinking: “You ain’t gonna put a billboard on Sunset or anything? It’s just going to be just on the South Side of Chicago? How am I ever going to expand?”

That’s evolved, Tillman says, citing changes brought by television and streaming services. But he still wishes his last film, the impassioned Angie Thomas adaptation “The Hate U Give,” had made a larger impact. As a story about a young woman led to the Black Lives Matter movement after tragedy, it’s a movie (currently free to stream) that speaks directly to the moment.

For Tillman, it’s the movie’s honesty that resonates now. It features a father instructing his children how to act in self-preservation if they’re ever pulled over by the police. The talk is one Tillman’s father gave him and one he’s given his 17-year-old son.

“To bare your truth is so important as a filmmaker,” says Tillman, who’s currently prepping a drama about the formation of the Black Panthers for Paramount Pictures. “Don’t let executives try to change your perspective as an African American man, as a filmmaker. What’s your belief? What’s your history? No one can tell your story better than you.

“Keep pushing the truth on screen.”