But now he wants them banned from all races.

The 26-year-old from Alabama said he’s been making an effort to educate himself on what the flag signifies for many people. Presumably, that for some it’s become an emblem for white supremacy, and is a reminder of America’s slave history, bigotry and oppression of African Americans.

“My next step would be to get rid of all Confederate flags,” says NASCAR driver Bubba Wallace after throwing his support behind the nationwide protests against police brutality. “Get them out of here.” https://cnn.it/3h1BT0y 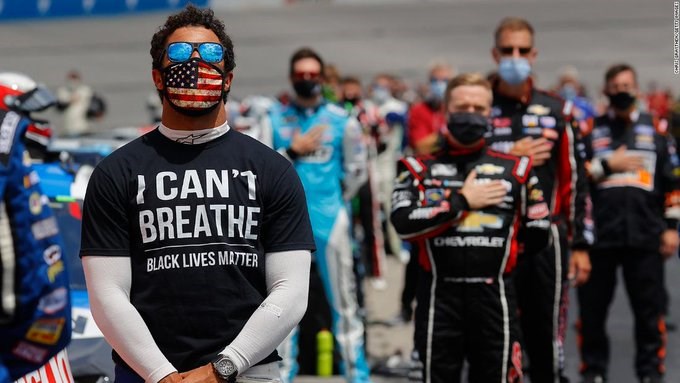 1,108 people are talking about this

“What I’m chasing is checkered flags, and that was kind of my narrative,” Wallace said in a Monday interview with CNN. “But diving more into it and educating myself, people feel uncomfortable with that, people talk about that — that’s the first thing they bring up.”

The red flag with blue bars and white stars, which the Sons of Confederate Veterans adopted as a symbol of Southern heritage, has been linked to NASCAR almost since its inception. For decades, the Darlington Raceway in South Carolina hosted the Rebel 400 in the spring, and featured the flag prominently on programs and other advertisements, all while “Dixie” played as the soundtrack at pre-race ceremonies.

However, over the years it’s become a bit of an albatross for the stock car racing association. In 2015, after a white supremacist killed nine African Americans inside a Charleston, S.C., church, then-NASCAR CEO and Chairman Brian France referred to the flag as an “offensive and divisive symbol.”

Despite a pledge to disassociate NASCAR from the rebel battle flag, the association did not go as far as to ban it from the stands. Instead, it “requested” people stop bringing them to races and set up a flag exchange program where attendees could trade in their Confederate flag for an American one.

And as protests have raged on in recent weeks, with thousands demonstrating against police brutality — especially brutality against black people at the hands of white officers — NASCAR has launched a campaign supporting racial equality and diversity.

Regardless, Wallace said further action on the flags is overdue, though he acknowledged the move would likely draw backlash from fans.

“There’s going to be a lot of angry people that carry those flags proudly, but it’s time for change,” he said. “We have to change that, and I encourage NASCAR to have those conversations to remove those flags.”

Those who disagree can “get back on the road where you came from,” Wallace said.

“We should not be able to have an argument over that,” he said. “It is a thick line we cannot cross anymore.”