Ellen DeGeneres didn’t punt on the chance to address controversy surrounding her seating arrangement at the Dallas Cowboys game Sunday.

The talk show host drew some criticism after she was seen sitting next to former president George W. Bush in a suite during the Cowboys’ matchup with the Green Bay Packers.

“People were upset,” DeGeneres says in a segment set to air on her show Tuesday. “They thought, ‘Why is a gay Hollywood liberal sitting next to a conservative Republican president?’ … A lot of people were mad, and they did what people do when they’re mad: They tweet.”

DeGeneres, who posted the clip Monday night on Twitter, said she and her wife, actress Portia de Rossi, were guests at the game of Charlotte Jones, the daughter of Cowboys owner Jerry Jones.

She then defended her friendship with Bush.

Yes, that was me at the Cowboys game with George W. Bush over the weekend. Here’s the whole story. 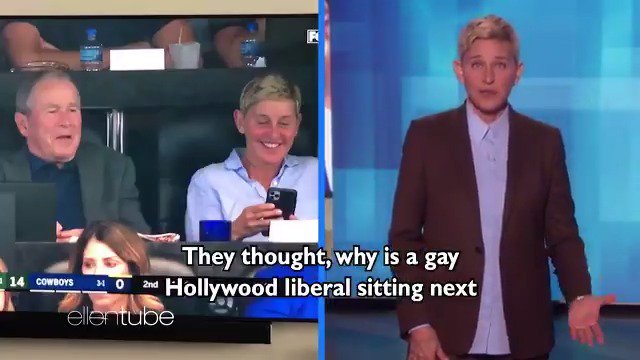 38.9K people are talking about this

During Sunday’s game, DeGeneres snapped a cellphone video that featured Bush smiling as she panned the camera over to him. Bush appeared on “The Ellen DeGeneres Show” in 2017.

In her segment addressing the situation, DeGeneres shared a tweet from someone who said seeing her sit next to Bush gave them faith in America.

“Just because I don’t agree with someone on everything doesn’t mean that I’m not going to be friends with them,” DeGeneres said. “When I say be kind to one another, I don’t mean only the people that think the same way that you do. I mean be kind to everyone.”

DeGeneres added during the monologue that she was rooting for the Packers, who beat the Cowboys on Sunday, 34-24.