Rep. Ilhan Omar, one of the freshman Democratic congresswoman facing attacks from President Trump and his supporters, received a hero’s welcome back at her home district in Minnesota on Thursday.

A cheering crown at the airport in the Twin Cities held banners with slogans such as “Stop Racism Now” and chanted “Welcome Home Ilhan” as the congresswoman emerged from her flight.

Watch the moment here, captured on video by Tom Hauser of KSTP:

Congresswoman Omar just arrived back in the Twin Cities. 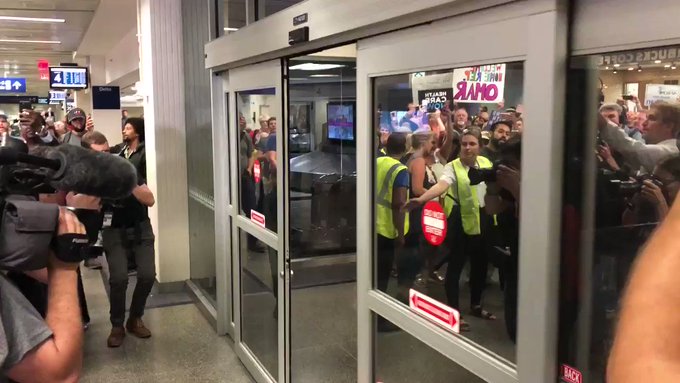 37K people are talking about this

Throughout this past week, Trump has targeted Omar and her fellow progressive congresswomen — New York Rep. Alexandria Ocasio-Cortez, Michigan Rep. Rashida Tlaib and Massachusetts Rep. Ayanna Pressley — with repeated attacks. In a tweet on Sunday, he said the four women of color should “go back and help fix the totally broken and crime infested places from which they came.”

And at a rally on Wednesday, Trump attacked each congresswoman individually. As he spoke about Omar, the crowd started to chant “send her back,” echoing the president’s tweet. (read more)